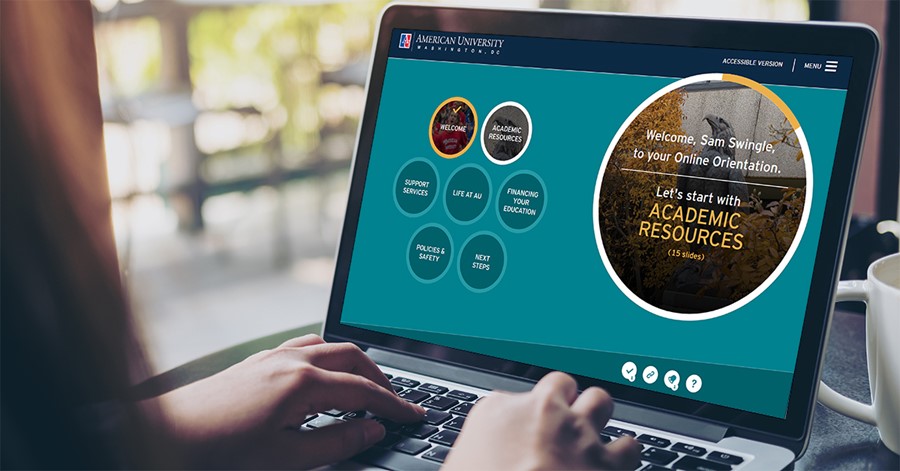 Jennifer advocated for opening the doors to her institution earlier by leading students toward an online orientation they could complete on their own time. This case study describes the strategies behind the initial online orientation development. This conference session recording demonstrates the custom design and unique capabilities of AU’s Advantage Orientation®.

With over three years of data generated from the system, Jennifer has documented improvements to the student onboarding experience at AU. Within a year of launching their online orientation, student groups participating in orientation programming from the year before tripled and even quadrupled.

Students arrive with more relevant information and actionable knowledge. They’re more confident because they participated in the online orientation to guide and prepare them. Student populations most “appreciative” are international students and graduate students who generally do not arrive on campus until August.

When things changed, it was time to adapt.

With the Advantage Orientation® firmly in place, Jennifer and her campus partners were able to transform AU’s orientation program from a hybrid model to a totally virtual environment in just a few weeks. The shift didn’t come without concerns — nothing some creative logistics, fresh perspectives, and an enthusiastic team of orientation leaders couldn’t overcome.

Jennifer had already established a system to keep orientation content fresh and up to date. The scheduled request campus partners had learned to expect went out in February. Jennifer oversaw the planned addition of three new videos her team produced using the platform’s content management system.

Key strategies for enlivening enrollment at AU are the aspects of timing and time. “It’s essential to engage with students when they’re admitted and give them time to absorb information without overwhelming them,” Jennifer said. For a process that usually started in early February, waiting for new safety guidelines to release online orientation to new students was out of the norm and felt counter-intuitive.

All Hands on Deck

“This is the third year we have had a supplemental online orientation and it serves as a great outline or ‘textbook’ for the virtual orientation experience,” Jennifer said. With their secure online orientation providing the foundation for a strong program structure, campus partners rallied to focus on the student experience. “We examined in-person events that were harder to translate online, audited the groups who participated in them and invited new people to lend their voices. Our communications director evaluated the content for storyline and narrative,” Jennifer recalls. This work created new, thoughtfully crafted multi-media and interactive content that was easily added to the platform as live events were reimagined using a balance of technology and people.

American University’s total student onboarding experience is designed to help connect new students with current students, other new students, and the campus community. Students are assigned an orientation leader who is an upper-class student. “Orientation leaders are the main point of contact between our office and new students. They email students and connect through groups they create on social platforms,” Jennifer said.

Over the summer, new students meet individually with their orientation leader on two video calls and Jennifer’s office hosts several virtual game nights so students can make connections outside of their orientation group. All the while, students are completing the online orientation and attending weekly webinar sessions hosted by various campus offices. While at a distance, AU has multiplied essential engagement touchpoints, allowing students to interact, ask questions, and become more self-assured.

Even though online student orientation at AU technically began late this year, student participation is ahead of previous years. “We’re asking students to move slowly through the online orientation and complete a new module every two weeks,” Jennifer said. Finding a good pace gives students time to absorb the information that aligns with live webinars and small group meetings.

“Over 1200 new students participated in the first round of small group meetings,” Jennifer said. Orientation leaders are providing essential feedback:

“Students are very receptive and engaged… and had a lot of fun with the icebreakers.”

“The dialogue between the students is incredible and I can tell they’re really excited to come to AU.”

“I just want to say that I am LOVING orientation and I think my students are, too! So, thank you for helping to create an amazing program, given the circumstances.”

Now that you know the end of the story, read the case study and watch the conference recording to learn how Jennifer led the development of American University’s online orientation from the very beginning. When you’re ready, complete the form to request a live tour!