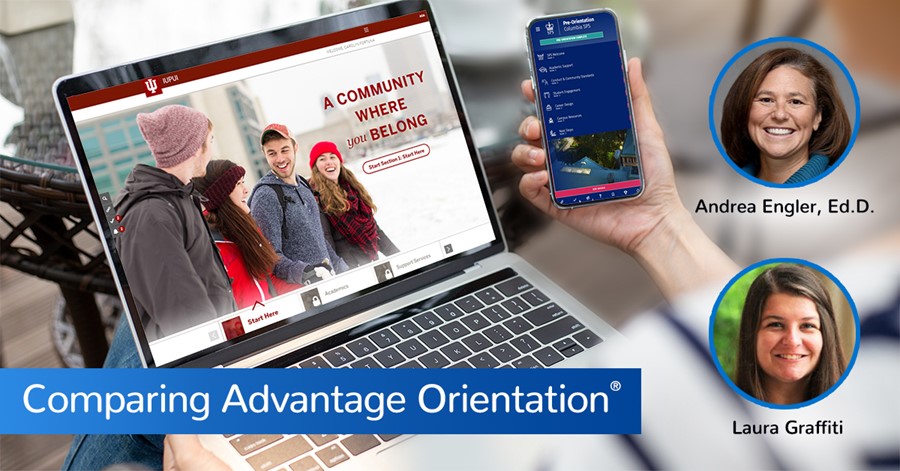 Dr. Andrea Engler and Laura Graffiti both agree. It is critical to make a strong impression with new students through their online orientations, something their learning management systems (LMS) could never do. Thanks to Advantage Orientation®, along with the technical, creative, and support services offered by Advantage Design Group®, both schools are providing high-impact and interactive virtual onboarding experiences for new students.

Columbia University’s School of Professional Studies previously used Canvas to build an online orientation and quickly realized Canvas was best used to present course curriculum. “For new students it was great for online classes, but not as a pre-orientation experience,” Laura recalls. Many graduate students at Columbia are adult learners, who have not taken an online course before and not used to something like Canvas. Laura believes Canvas needs a proper introduction before putting it in front of new students.

Students had a hard time navigating Canvas, Laura said. “It was unclear what was required, and Canvas wasn’t guiding students through.” Canvas has an introduction page, “but no real place to start, it feels more like an interactive syllabus,” Laura explained. She has observed how “people really love check marks and knowing when they’re ‘done’ with a section.” This is particularly true for required topics like Title IX and Academic Integrity.

Based on her experience using Canvas, Laura also noted some major shortfalls. The biggest frustration was the need to work with the Registrar’s office to manually add students into Canvas. Manual data entry results in a hidden expense and oftentimes leads to late admits falling through the cracks. Another population who was often underserved were students enrolled only in online programs. Now with Advantage Orientation®, all students, including online students, receive an engaging and consistent welcome and introduction.

For Columbia, the aesthetics of Canvas really missed the mark. “Canvas was not visually appealing, from the e-mail notifying a student they have been added to a Canvas course to the platform itself,” recalls Laura. At Columbia, Laura and her team wanted the first thing a new student sees from their new college to look polished “and show off who we are.” Just like an in-person orientation, Laura also wanted online orientation to be fun and spirited.

Other advantages for the Columbia team are the options to offer a single sign-on (SSO) experience, the built-in assessment, and the ability to create an acronym glossary. ADA compliance as well as general accessibility functionality is a priority and included in the platform. According to Laura, students report how much they like the interactive videos and the ability to save key information, using the platform’s unique “i” buttons, to a personal resource guide they can access any time.

In Spring 2019, the Columbia team worked on writing the funding proposal, gathered supporting documents, received contract approval, and started their project development with Advantage Design Group®. By Fall 2019, they had gathered b-roll video, Branding elements, and began working with campus partners to develop content. They “soft launched” the platform for Fall 2020 students in March 2020. The team is thankful they invested in Advantage Orientation® and are confident they are providing students with an outstanding online orientation experience. Building the platform took time, but maintaining the orientation, and refreshing content for the next group of new students is a much lighter lift. Now other schools and colleges at Columbia are interested in building online orientations with Advantage Orientation® because of the success of the School of Professional Studies.

Andrea at IUPUI had been interested in Advantage Orientation® for years, but cost and concerns over bringing in an outside product made coming to a final decision very difficult. Over the years Andrea attempted to build a few iterations of an in-house online orientation program, which she said, “proved to be very challenging.”

When it comes to accessibility, Andrea believes that the online orientation platform needs to be usable for all students. While the LMS is ADA compliant, “I want this platform to be dynamic, complaint and useable,” Andrea said.  The platform also needed a visual appeal. “The prototypes attempted in house did not have the 'wow' factor and certainly did not have the flow I was looking for in an online orientation experience.”

A big step toward making the final decision came when IUPUI completed a self-study through the Gardner Foundation for Transfer Students. According to report, it was recommended that transfer students and adult learners needed an online orientation. The self-study provided the support needed to secure the funding and move forward with Advantage Design Group® which specializes in online orientation.

Like Laura at Columbia, Andrea felt strongly about how online orientation fulfills an essential marketing strategy. “Canvas and other platforms don’t offer what Advantage does,” Andrea said. “Canvas is a linear product. It feels instructional. Students will get plenty of that later.” Instead, Andrea wanted to captivate students. She wanted to provide a transition “experience,” not just an introductory course. Her goal was “to build excitement and a sense of pride in the students.” IUPUI is a cutting-edge institution and Andrea wanted the online orientation to reflect that properly. IUPUI can deliver a dynamic and high impact online orientation which truly supports students in their transition.

Andrea spent a lot of time developing the messaging. She wanted the online orientation to connect with students as if we were "talking to them personally."  She wanted the online orientation to mimic students talking to students. Andrea also wanted it to be funny, interesting, and personal while helping students learn about the university. One regret Andrea had in her first year was doing videos in house. “I needed to save on costs, however, not having any skills in media development made the work doubly challenging,” she said.  Andrea recalls spending a lot of time preparing and coaching them on what she wanted.

Andrea still updates all her content twice a year, adding and refreshing videos each cycle. Regardless of platform, online orientation is not a “set it and forget it” project,” Andrea said. It needs continuous improvement to keep up with the changing times and trends. Andrea’s advice to orientation professionals currently using an LMS for online orientation is to realize the hard work of designing and placing the content for the online orientation is already done! Moving to Advantage Orientation® from an LMS requires less pre-production work than they might think.